When a successful veteran of the biotech world and influential venture capitalist says our city will soon join those heavyweights as corporate destinations, there may be something to it. Fletcher McCusker, CEO of UAVenture Capital and one of the region’s most respected economic development voices, believes Tucson will be a biotech and biomedical hot spot in the next three to five years. That’s going to take venture capital and the brain power and can-do attitude of a world-class university.

In this special report on the region’s biosciences industry, BizTucson spotlights several of the region’s biotech companies from A – Accelerate Diagnostics – to almost Z – Xeridiem Medical Devices. Each has a unique story to share and one thing in common: world-class work in Southern Arizona.

Some are homegrown successes. Ventana Medical Systems, now known as Roche Tissue Diagnostics, was founded by famed University of Arizona pathologist Dr. Thomas Grogan and eventually sold to Roche, a Swiss multi-national company. The new owners have remained faithful to Southern Arizona by expanding their Oro Valley campus and branching out to Marana.

Others, including Sandvik Materials Technology, are new to the market. In fact, because of the COVID-19 pandemic, none of Sandvik’s corporate leadership even visited Tucson before the company agreed to expand here last year. The entire recruiting process, led by Sun Corridor Inc., was done virtually.

Tucson is a strong biotech market thanks to the presence of UArizona. Led by President Dr. Robert C. Robbins, UArizona ranks among the top 20 universities in the nation in research and development expenditures, according to the National Science Foundation.

UArizona also has the resources and expertise to help start-ups become successful through Tech Launch Arizona and two – soon to be three – Tech Parks Arizona facilities.

The university also plays an important role by producing outstanding graduates from its colleges of agriculture, engineering, life and health sciences, medicine and pharmacy. More job opportunities are keeping talented alumni in Tucson.

The following link offers a report on the progressing biosciences hub in the region and the future it holds for the economy, the community and the industry itself.

11 Reasons the World is Watching Tucson

No. 1 UNESCO City of Gastronomy 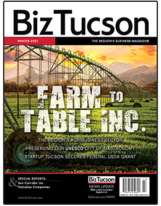